In the windswept reaches, that is where you will find Ariana Saraha & Fernando Medina, aka FLIGHT BEHAVIOR.

Ariana Saraha (vocals, percussion) and Fernando Medina (drums, percussion) met in the wind-torn and rain-soaked rainforests of the Pacific Northwest. After sharing the darkest winter of their lives, they narrowly escaped to keep wandering... They've since found themselves lost on snow-crested peaks, serenaded by cacophonies of birdsong, and resting deep in the quiet desert heat...

Musically, these two follow in the footsteps of bands such as The Creatures and Dead Can Dance in their capacity to create whole sonic worlds with primarily the voice and rhythm.

They have released two albums as Flight Behavior: Songs of Christmas (2020), and now From the Wild (2022), an homage to the untamed earth that flows even in our veins...

Weaving spells from the very fibers of life—starlight, storm and stone—Flight Behavior incants the songs and paints the rhythms of the unheard earth and the forgotten ancients. 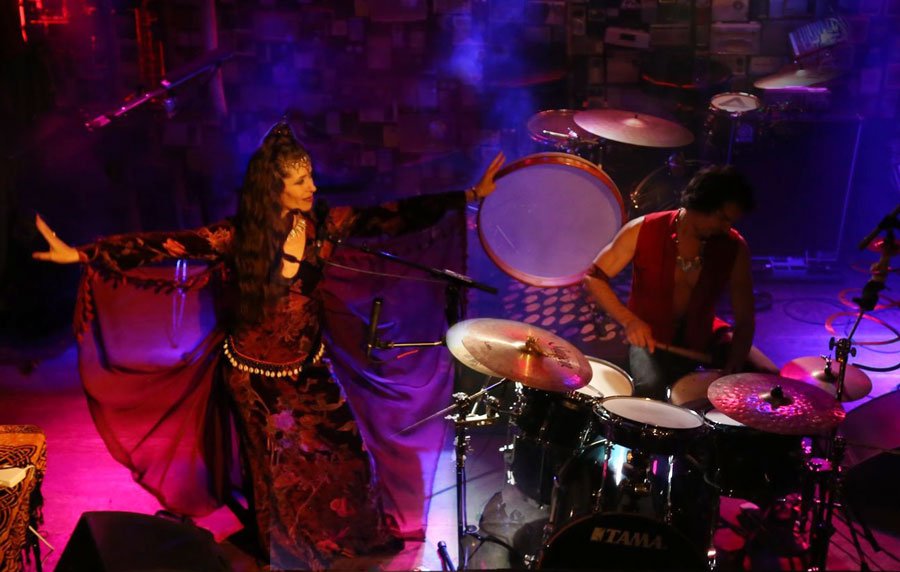 Ariana Saraha is a singer, musician, and composer from the wilds of the West with an Old World soul. Most often compared to Celtic singer Loreena McKennitt and alt-world artists Dead Can Dance, Saraha's song is her own. As one critic said, "I listen to Loreena McKennitt, Enya, Clannad, etc. and often after about three or four songs I’m feeling like it all sounds the same. Not the case with [Saraha]."

But what really invites the listener in, beyond her vocal finesse and exotic influences, is Saraha’s rare mixture of raw wildness and heartfelt intimacy.

"I am utterly unprepared for her wild, mystical soul and music that transports me to faraway realms and ages. I feel as if I have stumbled unknowingly upon a gypsy caravan and stepped into the circle of dancing firelight and music." — L.R. Heartsong, Author

To read more about Ariana’s musical and professional experience, see below… 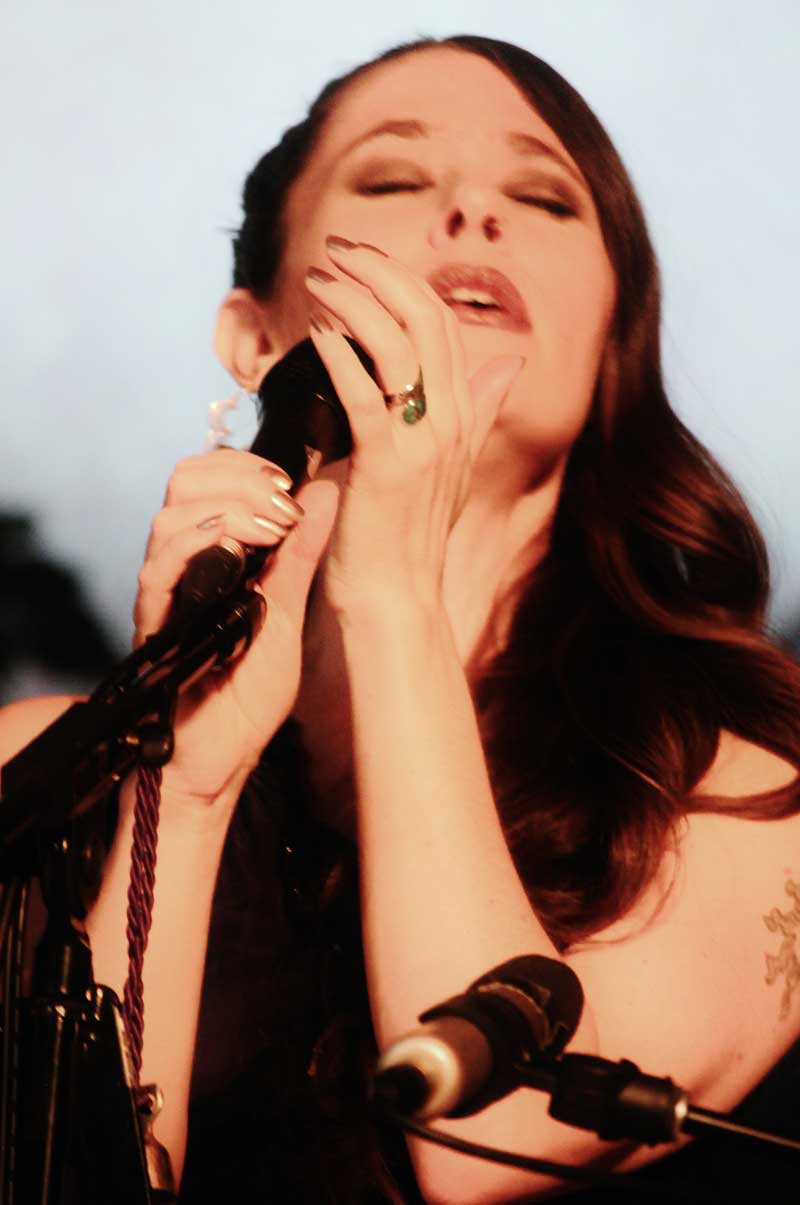 More than just a drummer, Fernando Medina is a composer and arranger with orchestral and cinematic sensibilities on top of his rock background (everything from prog to pop to metal), jazz sensibilities, and Panamanian Latin roots. As a drummer, Medina is a “rhythm painter” who weaves lyricism and landscapes out of percussion.

Medina has toured with bands with such warm, fuzzy names as Christian Death and After The Crash, shared the stage with immensely contrasting acts such as Jah Wobble, The Creatures, and Eddie Money, played the SXSW Festival, Panama Jazz Fest, and others between and beyond.  www.fernandodrums.com

"Fernando has the technical skills of a professional classical musician, the creativity of a free jazz player, and the emotional capacity of a singer-songwriter. It's a powerful combination." — Robert Filippo, Strezo band, Atlanta, GA 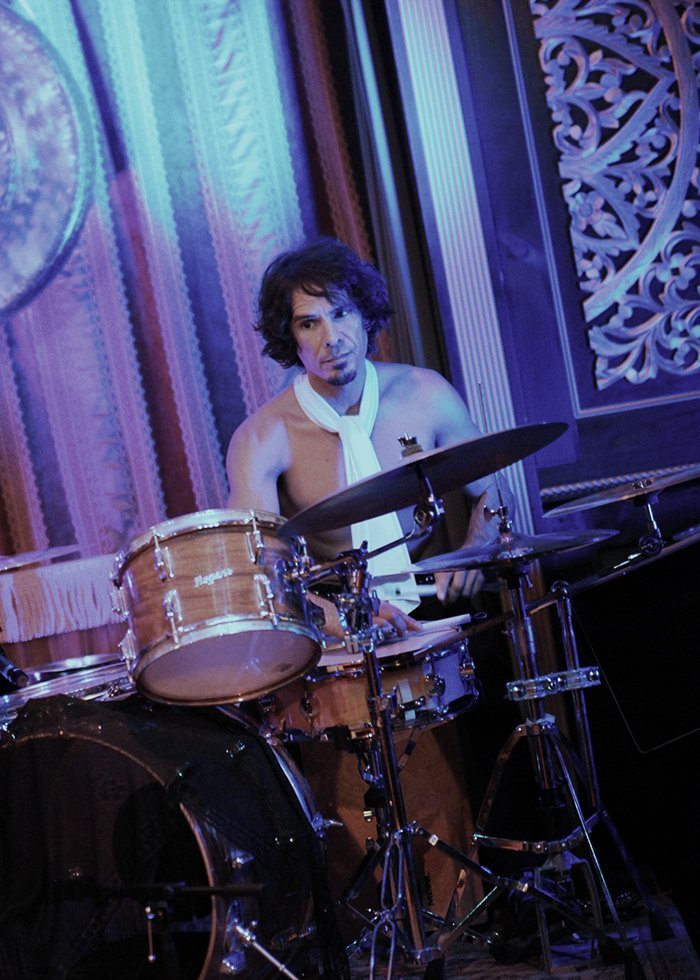 “Ariana’s voice is a soaring, beautiful thing. Wrapped around expertly-played instruments of the Middle East, Persia, and India, her song very much takes flight. You follow it like a bird into the blue or a diver into the depths. Where Dead Can Dance brought us into the Labyrinth, Ariana Saraha offers to meet us in the Silence.”

“I am utterly unprepared for her wild, mystical soul and music that transports me to faraway realms and ages. Frankly, I am blown away. I feel as if I have stumbled unknowingly upon a gypsy caravan and stepped into the circle of dancing firelight and music.”

“Ariana seems to project a sort of magic that pulls people in. The rare ability that everyone wants and no one knows how to develop.”

“Ariana really, really helped me to come into my own vocalization. Her Womensong gatherings were an intimate setting for very creative openings. Back in the days when I could barely manage a squeak, she gave me self-confidence to go farther. I thank her every day for her expertise and assistance.”

“Ariana’s performances are prayerful and passionate, provocative and playful. Her beautiful voice and rhythms weave sublime strands of the sacred into a kinesthetic personal experience for the listener. Yum! Long live the gypsy heart.”

Though born to a singer, in a lineage of singers, Ariana didn’t consider herself one until a voice and a song flew unbidden from her lips one early spring day in 1996. The floodgates opened and Saraha wrote over 100 songs in her first three years of songwriting.

And then life took another unexpected turn: in 1999 she was offered the opportunity to sing lead vocals for the Colorado-based Mediterranean & Middle Eastern band Sherefé. For three years she learned and performed the traditional music of the Mediterranean, Balkan and Arab worlds, singing in Turkish, Arabic, Greek, Ladino, Bulgarian, and Armenian languages.

In 2004 she went in another direction and joined the electronica ensemble Tribal Electra for another three years, singing ancient mantras and prayers in Sanskrit, Hindi, Arabic, English, and Hebrew over a bed of electronic beats and electric guitar.

In 2007, enriched by these diverse musical experiences she finally launched her solo career by performing her original music at festivals and venues throughout the western United States (see full CV below).

In August 2010, Saraha recorded a live album in Boulder, Colorado (which was released the subsequent spring). She released her first studio album in 2015, Maiden of Midnight, which was co-produced with acclaimed dream-pop songstress Tina Malia and Mideast music guru Jesse Manno. She has just completed her follow-up album, From the Wild, after a long process of gathering inspiration by traveling the primordial and sweeping corners of the earth.

Along the way, Saraha found herself “accidentally” producing all her own albums. She now proudly bears the title of “Producer,” and is steadily refining her skills as an audio engineer (sure to be a lifelong quest).

. . .
For Fernando’s CV and complete bio, please visit his website.

Recordings ARIANA HAS APPEARED ON: