Their latest album “From The Wild” brings us back to a lost, primal world. Painting guttural pictures of the severed connection between creation and the civilized and yet beckoning the heart to reconciliation with nature.

Boasting earthy, ethereal tones, you can feel the connection between the artists and the album. Heavy in texture and tone, listeners are sure to hear the passion behind this project pouring from their speakers.

We spoke with Ariana Saraha and Fernando Medina from Flight Behavior about the album, their inspiration and heart behind their music… 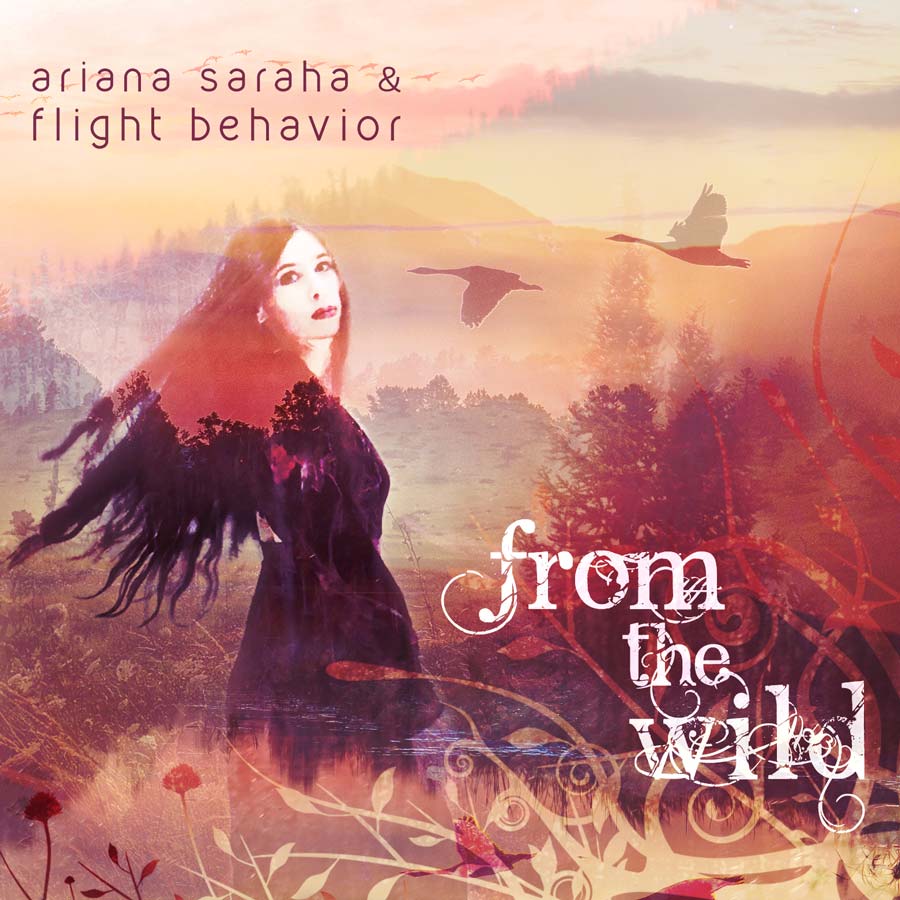 Bridge: Describe yourself and your sound…

[Ariana Saraha]
Myself I would describe as a woods-witch whose singing is most inspired by the primordial, torrential, tempestuous, ephemeral, and enchanting qualities of the wild world…

To some degree, that also describes our sound, ha ha ha. It teeters between primordial and celestial.

But I would also add that there is a cinematic quality, with a Mideast-tinged, dark folk, art rock edge.

Bridge: Where do you find the most inspiration for your art?

[AS]
In nature, for sure! In the primordial textures and motions of the more-than-human world. I’d dare say that mother nature is like the wildest painter, sculptor, dancer, and musician imaginable. I aim to emulate that force while also singing from my very human heart and perspective.

[Fernando Medina]
The moods, mission, and scope of what Ariana brings really inspire my (hopefully) artistic contribution to the art of Flight Behavior. Also, the worlds of inspiring, diverse music, film, literature, etc that I’ve related to, along with my experiences collaborating with so many other artists and bands in diverse situations and locales – all that contributes as well.

[AS]
Indeed, Fernando, you really bring a rich and varied history to your drum artistry and to our band!

Bridge: Can you tell the heart and story behind the new album, “From The Wild”?

[AS]
Ha ha ha – well I think I touched upon it above. But to take it a little further: in beginning to write the album, I started going out into nature more, getting to know it in its many seasons. But I found myself so at home there that it quickly became clear that I too am of nature. Hence why we named the album “from“ the wild, not “into…”

So somehow telling that story – of our human place within the wild world – became the mission. And then it was a pretty deep process of crafting the arrangements and instrumentation (and even sound design) to evoke that.

I think we might have achieved it, but folks will have to listen and decide for themselves!

Bridge: If you could only point a listener to one song on the album, which would it be and why?

[AS]
“The Last Days.” Because it’s beautiful, heart-wrenching, and asks good questions in these perilous times. And did I mention it’s beautiful?

[FM]
“Grandmother’s Tears.” It has a driving, “tribal” quality that seems to hook a lot of listeners, me included!

Bridge: In speaking of the wild, which animal do you relate to most and why?

[AS]
Oh dear, we have to pick one? We pretty much love all the critters…

We did choose our band name partly because of my affinity with birds. But it’s actually based on a novel about monarch butterflies, which unfortunately have just been listed as endangered.

I think more than any one animal, what is more interesting to me is loving them all, and thinking of them not just as a backdrop to our human world, but as part of the real world we live amidst. I hope we will continue to protect them.

[FM]
Hear, hear, Ariana! Couldn’t agree more. But I’m gonna go out on a limb and say squirrels, because they climb trees (like I do) and are rather funny, ridiculous, temperamental, little nutjobs (umm, maybe also a tad like me)

Bridge: What is next for you and Flight Behavior?

[AS]
Well we’ve already started recording our next album, ha ha ha. So that’s on our plate! And we’re still working on getting the word out about this one. Honestly, our audience seems so global that it has made more sense to do outreach through the interwebs at this point, rather than just touring some small portion of the US. Though we would love to get back on the stage again soon!

So thank you for helping spread the word – we hope our music will be good medicine for the world in these times! The way I see it, the more we can get in touch with our wild nature – in other words, the part of ourselves that belongs to the wider-than-human world – the more we will want to protect this planet, our home, that hangs in such precarious balance.

“Where I live” or “Why small talk is hard”

A Spell of Protection… May my curiosity-about a

Last night in the midst of songwriting, I paused a

Thank you for a lovely year! It’s been so fun to

A New Year’s blessing of reset ✨ This is what

For years now I’ve been practicing slowing down